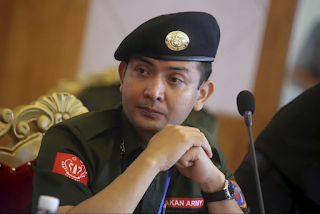 CHIANG MAI – At just 43, Major General Twan Mrat Naing may be the youngest and most successful rebel commanders in Myanmar. The force he leads, the Arakan Army (AA), has grown from a handful of recruits when it was first established in April 2009 into one of the war-torn nation's most powerful and potent ethnic armies.

AA first waged war against the Myanmar military in 2012 in northern Kachin state arm-in-arm with the Kachin Independence Army (KIA). It later fought alongside the Myanmar National Democratic Alliance Army (MNDAA) in northeastern Shan state before launching an insurgency in its home state of Rakhine, also known as Arakan, where thousands have flocked to join its ranks.

Thanks to an unofficial ceasefire reached in late 2020, Rakhine state has not seen the kind of turmoil and violence that has engulfed the rest of the country since the military's democracy-suspending coup last February 1. In that relative vacuum, AA and its United League of Arakan (ULA) political wing have gradually built up a parallel administration and now effectively run much of the state, especially its northern regions.

But AA's rebel threat is alive and well, not least through its membership in three key anti-military alliances – the Brotherhood Alliance, the Northern Alliance and the Federal Political Negotiation and Consultative Committee (FPNCC) – that combined account for most of the nation's ethnic fighting forces. If AA were to resume its hostilities full force, some believe it could critically overstretch the Tatmadaw.

Asia Times: The situation in Arakan (Rakhine) has been relatively calm since you entered into an informal ceasefire agreement with the Myanmar military shortly after the November 2020 election. But, given the fact that the rest of Myanmar is in turmoil, for how much longer do you expect the peace to last?

Twan Mrat Naing: The informal ceasefire is not that stable.  We have been at daggers drawn. It's uncertain how long the ceasefire will last, but we wish to have a meaningful ceasefire for mutual benefit and interests.

The SAC [State Administration Council] is fighting on other fronts but with an ad hoc strategy. We know they are furious because we have established our own administration with judicial, taxation, public security branches and other governmental institutions.

Asia Times: What is your relationship with other ethnic armed organizations in Myanmar, not only your allies but also the Karen National Union (KNU), the Karenni National Progressive Party (KNPP) and its Karenni Army, and the Restoration Council of Shan State (RCSS), which are not members of any of the fronts to which you belong?

Twan Mrat Naing: The Arakan Army is actively engaging in the operations of the Brotherhood Alliance and the Northern Alliance, and we are still a member of the FPNCC. We also maintain good relationships with the KNU, the KNPP as well as most other ethnic armed organizations.

Asia Times: What is your overall assessment of the SAC's performance since it seized power on February 1 last year? Are talks possible or is armed struggle the only way forward?

Twan Mrat Naing: The SAC's health system is crumbling, economically the country is going bankrupt and the country is paralyzed politically. SAC is paranoid and has become more of a diplomatic pariah than ever before. And its military is overstretched on many fronts. The junta has found itself in the middle of a storm, and they do not have much leeway for any mistake.

Once their chain of command and cohesion is disrupted with inner cleavages and mutinies, they could be blown out like a supernova. But we can't underestimate their military strength and resilience – they will do anything to remain in power and they have manifested that with indiscriminate barbarity.

It seems to me that peace talks are very unlikely under current circumstances. With such animosity prevailing, peace talks would amount to mere political rhetoric, not real negotiations.

Asia Times: How do you view the National League for Democracy's role (NLD) in national politics and the Arakan National Party (ANP), the main overground political party in Rakhine state, in regional politics?

Twan Mrat Naing: NLD is not in very good shape either, although it won the majority of votes in a staggering victory in the previous [2020] election. But with its aging and ossified leadership, its future does not look promising and is not up to the expectations of the people. The NLD needs a new leadership, or, for the good of the people of Myanmar, another new capable political force should take over in the political vacuum that exists today.

In regard to the ANP, it would hinge on whether or not there will be an election in 2023, as promised by the SAC. [Myanmar's] political future is dire and unpredictable. Another likely scenario for ANP is that it could merge with the ULA along with other parties and individuals if there are no more elections in the years to come.

Asia Times: Is your final goal independence for Arakan (Rakhine) or autonomy within a federal union? What kind of future state structure do you envisage for Myanmar?

Twan Mrat Naing: The right to self-determination and sovereignty is at the heart of our national movements. We will see whether a Federal Union of Myanmar will have the political space for the kind of confederation that our Arakanese people aspire for.

We would prefer to remain with our [ethnic] brothers and sisters, but if our rightful political status which we desire is not accommodated within this union, it would behoove us to be a member of the international community on our own.

Asia Times: How strong is your army and how much of Arakan (Rakhine) does it control?

Twan Mrat Naing: We have trained over 30,000 soldiers in 13 years (since founding in 2009), and there are still more combatants undergoing training in command and control, and technical skills. Around 70% of our troops are battle-hardened and have combat experience. 5,000-6,000 thousand troops are deployed in our allies' areas, the rest are in Arakan (Rakhine).

We control around 60% of the areas in the north of Arakan (Rakhine) but less in the south. In some areas, it is difficult to draw distinct lines of control between us and the Myanmar army. They still control urban areas and have to keep those for strategic reasons, but we still project our authority as required in those areas and there are still a lot of contested areas as well.

Asia Times: What is your relationship with the People's Defense Forces and associated resistance armies in nearby Chin state?

Asia Times: You said in an interview published by Prothom Alo (Bangladesh) on January 2 that you recognize the human rights and citizenship rights of the Rohingyas. Does that mean you are advocating the return of Rohingya refugees now in Bangladesh and their right to citizenship?

Twan Mrat Naing: We recognize the human rights and citizenship rights of all residents of Arakan (Rakhine), but a massive repatriation of refugees in the current situation could unleash a new wave of unrest. Any repatriation would have to be voluntary and be done by legal means under international supervision.

A major issue for most Arakanese would also be the name with which the refugees would want to be identified. "Rohingya" is not a term that most Arakanese accept. They find it offensive as they feel that it deprives them of their history. They are the original inhabitants of the land.

The Muslim population has come in different waves, and then chiefly when the country was under British rule. If they have lived in Arakan (Rakhine) for generations, they can become citizens. But it's also a question of identity.

Asia Times: What are the chances of Muslims, Buddhists, Hindus and Christians being able to live together peacefully in Arakan (Rakhine)?

Twan Mrat Naing: It is achievable when we don't have outsiders manipulating us and using one group against another. Evidently, our Arakan (Rakhine) state never had the current level of social stability and racial harmony during 1941/2 to 2019. Now, we have more social stability, racial tension has started to decline and more positive social activities can be found. These are observable shifts and more changes should be started from within.

Asia Times: What is your view of Rohingya organizations such as the Rohingya Solidarity Organization (RSO) and the Arakan Rohingya Salvation Army (ARSA)?

Twan Mrat Naing: We do not have any ties with either of them. The RSO appears to be politically more mature than ARSA. But ARSA has more networks and is more active. You can see what ARSA has been doing against their own community leaders at the villages inside Arakan (Rakhine) and at refugee camps in Bangladesh. Some educated Muslims in the diaspora are irresponsibly manipulating ARSA and exploiting the troubled political environment.

Asia Times: Your only foreign neighbor is Bangladesh. How would you describe your relationship with authorities and people across the border, for instance the Marma community? And, a bit further afield, India?

Twan Mrat Naing: The Marma, and the Magh (the Mog of Tripura) are of the same blood as us, as are other ethnic inhabitants across the tri-border region. They have a profound understanding of our movement and sympathy for us.

In regard to Bangladesh's authorities, it's not that bad, but not yet so good either. We haven't noticed that the Bangladesh government has a clear policy or strategy for a formal or informal relationship with us yet.

It should be improved though; they should take a step forward and do so proactively. A better relationship will be mutually beneficial for both of us, and, more importantly, in coping with the refugees, aid delivery, the pandemic and security issues. In order to better serve the interests of the people on both sides, the relationship could also be extended to include health care, education, trade and commerce and other sectors.

Rohingya men look at smoke billowing above what is believed to be a burning village in Myanmar's Rakhine state, as members of the Muslim minority group take shelter in a no-man's land between Bangladesh and Myanmar, in Ukhia on September 4, 2017. Photo: AFP / K M Asad

Asia Times: Can other countries such as China and Japan play a role in the efforts to reach a peaceful solution to the conflict in Arakan (Rakhine) and the rest of Myanmar? What about the strategic competition between China and the United States?

Twan Mrat Naing: In theory, they can play a vital role but reality is more complex. Changes have to come from within, and that would sound more probable and realistic to me. But the odds are still unclear. The US-China competition has not affected us and is not our concern.

Asia Times: And, lastly, a personal question: why and when did you decide to take up arms against the Myanmar military and the rule of the central government?

Twan Mrat Naing: Myanmar does not have a healthy political space to settle political inequalities and entitlements. I won't be crying for the moon. My rationale is that we are not requesting or asking for what we want from our enemy who has deprived us by force.

We shall create our own destiny with our own hands, no matter what they think. We must build on our own and earn what we deserve. My mission is to restore our sovereignty and reclaim a rightful political status for Arakan (Rakhine).