The Myanmar Government’s Systematic Destruction of the Rohingya

The Myanmar Government's Systematic Destruction of the Rohingya

Since 1962, the Burman Buddhist supremacist government of Myanmar has ruled with an exclusionary, authoritarian ideology. Rohingya of Rakhine State are excluded from citizenship and brutally persecuted because of their ethnicity. The government's policies were described in 2000 as "Ethnic Cleansing" by the International Federation of Human Rights Leagues1 and in 2010, as Crimes Against Humanity by the Irish Center for Human Rights2. These policies continue in the current Rakhine Crisis. Persecution of Rohingya has finally attracted attention as many hundreds of Rohingya have drowned while trying to escape from Rakhine State in rickety fishing boats.

In 1982, the Burman supremacist government stripped most Rohingya of their citizenship. They were renamed "Bengalis," and reclassified as foreign to Myanmar. Rohingya speak a different language and are not "Benglais," a different ethnic group that lives mostly in Bangladesh. Their only common identity is that both groups are Muslim. The government claimed that the Rohingya were colonial era settlers from Bengal, British India, denying the fact that Rohingya have lived in Rakhine State for hundreds of years. This denial of citizenship has rendered Rohingya effectively stateless.
Because neither Bangladesh nor India accept Rohingya as "Bengalis", Rohingya are prey to international trafficking, exploitation and abuse. Thailand, Malaysia, Indonesia and Australia refuse them and send their boats back out to the open seas, where many die from starvation or dehydration.

Despite direct appeals by President Obama and other world leaders, the Myanmar government has refused to reinstate Rohingya citizenship. It has violently forced Rohingya to accept the "Bengali" label, which Rohingya reject. Government officials and other Buddhist extremists, including some of their Buddhist Rakhine neighbors, vilify Rohingya as illegal Bangladesh invaders. They falsely charge that Rohingya intend violent Islamist conquest of Myanmar and forced conversion of Buddhists.

Even after reforms in Myanmar that freed Aung San Suu Kyi, the "transitional" national government has maintained the military dictatorship's authoritarian control of Rakhine State, including selection of all state government officials, control over national security forces, and control of movement, access and communications. Aung San Suu Kyi has remained silent about the Rohingyas' plight, ignoring pleas from other Nobel laureates, including Archbishop Tutu.

The Myanmar government's narrative blames the Rohingya victims for provoking the Rakhine Crisis. The official narrative claims that "Bengalis," i.e. Rohingya, started killing and arson attacks upon ethnic Rakhine in downtown Maungdaw on June 8, 2012. The narrative portrays national security forces as neutral peacekeepers and protectors for both the "Bengali" and Rakhine communities. What followed was Rakhine communal vengeance provoked by the "Bengali" aggression.

My personal investigation, including in-depth interviews and eye-witness testimonies from over 118 Rohingya, and many other survivors and witnesses to the Rakhine Crisis has revealed a narrative diametrically opposed to the official narrative. The forced deportation of Rohingya from Sittwe city was planned by the national government leadership, national security forces and the local Rakhine officials in 2010, two years before the deportations. Two months before the Crisis began, some Rakhine citizens received reports of government plans to drive Muslims out of Rakhine State. Two weeks before the violence, Sittwe Rakhine were informed of the plan of attack and promised protection. Since 2012, Myanmar officials have been committing systematic and organized destruction of Rohingya in Rakhine state, i.e.. This is not only persecution. It is actual Genocide3.

On June 11, 2012, national security forces began mass arrests of Rohingya, including women and children, but especially targeting young men and teens, rich, educated, community leaders and relief staff. Beating and torture commonly accompanied Rohingya arrests. They were imprisoned. Though some arrested Rohingya were able to bribe their way to freedom, most remained in prison, if they survived. Many simply disappeared after arrest.
Security forces and ethnic Rakhine have continued to kill, torture and otherwise harm Rohingya with impunity. Many Rohingya have died from being refused hospital treatment. Credible allegations continue that Rohingya patients, mostly women in childbirth and/or their newborns have been killed in Siitwe and Maungdaw Township Government Hospitals, where most Rohingya are referred for hospital care.

During the ongoing Rakhine Crisis, more Rohingya and other Muslims have been displaced or trapped where they live than are registered as internally displaced persons (IDP's.) On the other hand, more ethnic Rakhine have been registered as IDPs and have received relief than were attacked. In spite of this, the Myanmar government claims that international assistance has been "biased toward Bengalis."

The Myanmar government restricts humanitarian and development relief to Rohingya. The government has blocked international investigation into the Rakhine Crisis. Witnesses to the violence against Rohingya have been killed, tortured, imprisoned and banished. Doctors Without Borders (MSF-H) was expelled from Rakhine State. The Rohingya currently receive almost no medical care. Deaths in childbirth, from ordinary infections, and other preventable causes have skyrocketed.

Since the 1990's the national government has imposed birth and marriage restrictions upon Rohingya. Rohingya couples are permitted only two children, and must hide any other offspring during home inspections. The Rakhine Crisis has brought a surge in rape against Muslim women, children and men. Rohingya women have been held as sex slaves and impregnated in a Sittwe military camp.

The Rakhine Crisis is the first national government campaign of violence against Rohingya that has included large-scale local ethnic Rakhine participation. Violence by local militias has given the national government a way to deny its own responsibility.

The Myanmar government official death toll of 200 from June through October 2012 grossly understates the number of deaths. Starting June 8, 2012 in urban Maungdaw , where anti-Rohingya massacres started, every night, military truckloads of dead Rohingya bodies were dumped off a bridge at the edge of east urban Maungdaw.These bodies were dug up and moved by the time the first international diplomatic visitors flew in helicopters into Maungdaw. Such cover-ups are a classic tactic of denial.

1 https://www.fidh.org/IMG/pdf/arakbirm.pdf FIDH (2000) Burma repression, discrimination and ethnic cleansing in Arakan FIDH International Mission of Inquiry April 2000
2 Irish Centre for Human Rights (2010) Crimes Against Humanity in Western Burma: The Situation of Rohingyas
3 "Acts committed with intent to destroy, in whole or in part, a national, ethnical, racial or religious group" What is Genocide?
http://www.genocidewatch.org/genocide/whatisit.html
Posted by Australian Burmese Rohingya Organization (ABRO) at 00:11 No comments: 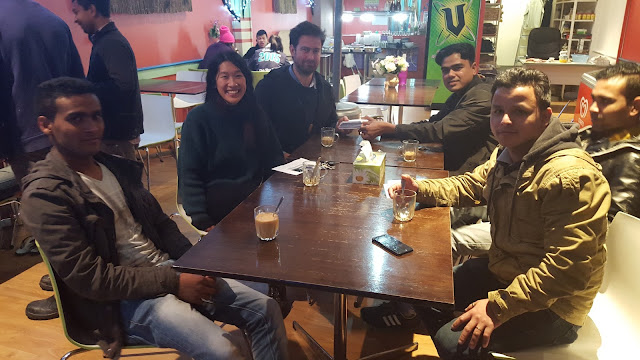 According Habib (member of Rohingya Community-ABRO), Dr. Liam who is a team leader of Monash Refugee English Class has handed over gift-cards to him for distribution ahead of Eid Celebration.

Habib said, “the gift cards will be given to current students, new students and single mum and vulnerable family group”.

“The next focus of the Monash Refugee English Class is to assist additional supports” he added.
Posted by Australian Burmese Rohingya Organization (ABRO) at 19:39 No comments:

A Brief Presentation on Rohingya

presented by Habib
Posted by Australian Burmese Rohingya Organization (ABRO) at 20:06 No comments: