Marxism'18 session: The Rohingya and The False promise of Suu Kyi 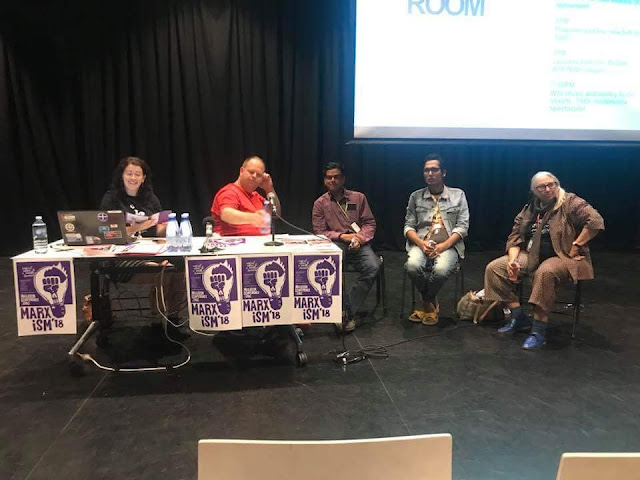 Marxism'18 session on "The Rohingya and The False promise of Suu Kyi" was held today 9.30am at Victorian College of Arts jointly with:
Refugee Action Collective,
NUW and permanent supporter Tim de Beauvoir,
a super Teacher from Adelaide who read out several pages about Suu Kyi,
many other individuals, students.. 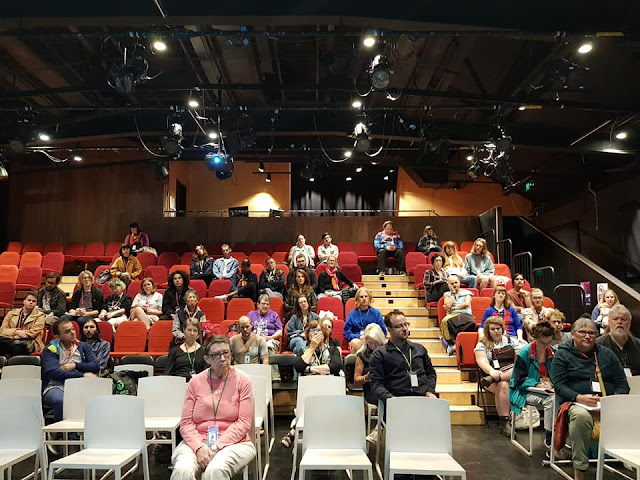 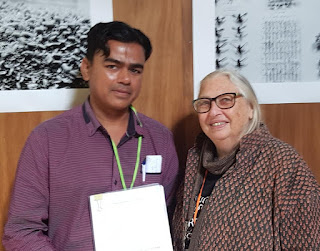 by Admin,
The Australian government and the NSW Police locked down the entire Darling Harbour, not allowing any protest for 16, 17, 18 March 2018 where Asean Australia Special Summit taking place and Ms. Suu Kyi got warm welcome..
The Protest was therefore shifted to Sydney Town Hall Square and began from 10am and ended by 2pm. Over 500 members from Vietnamese, Cambodian, Laos, Rohingyan, APHEDA, NUW and many other from different societies and individuals including MPs have actively participated in the event.
The following four pages long statement detailing about Rohingya crisis was read out by Mr. Habib on behalf of Rohingya community from Queensland, Melbourne and Sydney. 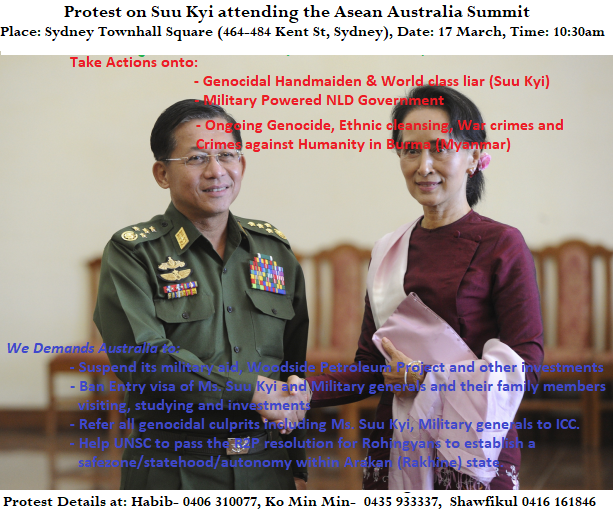 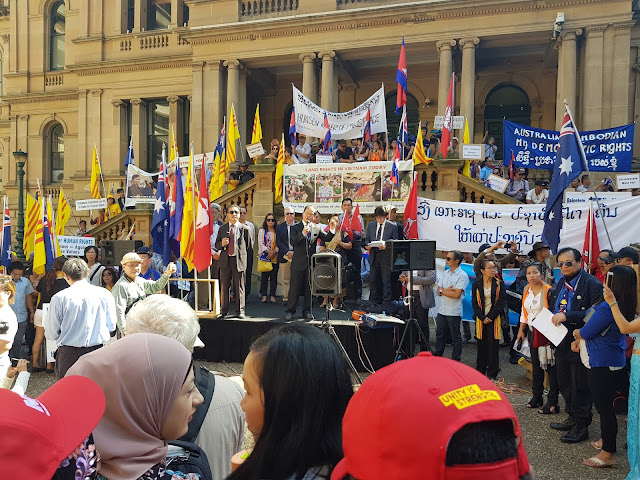 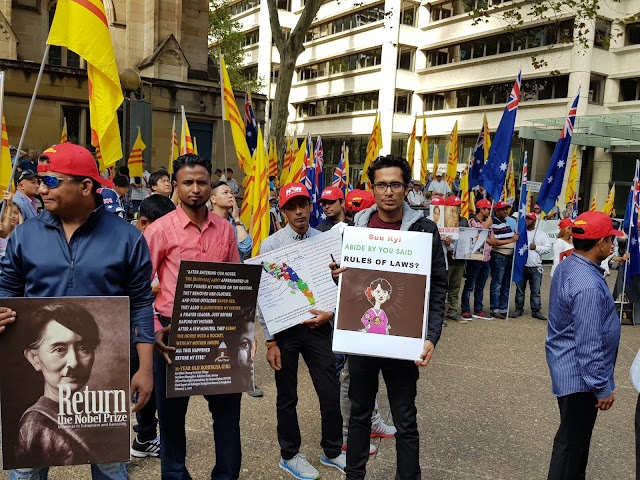 The attack from 25 Aug 2017 in Maungdaw, Buthidaung and Rathedaung townships by government armed forces jointly with Rakhine armed force ALP and government trained Rakhine gangs, used fight helicopters, tanks, machine guns, rocket launchers and killed brutally and indiscriminately. Women and girls as young as aged 12 were raped in front of their relatives and in the public and shot dead brutally, children including babies were slaughtered, burnt and buried alive, laying landmines along the ways of fleeing.
MSF report showed about 10,000 dead among the arrivals of just in the first month. According to the ASEAN Parliamentarians for Human Rights (APHR) cited data from the Bangladeshi government that puts the number of “lost” parents as high as 43,700 people.
The death toll is significantly high If we count the number of parents lost for current 40,000 orphans plus family members who lost their husband, wife, children, siblings. Arrest including children and people who teaching Rohingya kids, distributing rations, language support workers, medical assistance providers, bearing phones, having radio and foreign contacts. Looting goods and cash, crops and animals. Up to date, more than 400 villages of total about 485 villages have been completely razed down and the government forces bulldozed the remnant parts of the building by following days. Nearly 700,000 out of estimated 770,000 Rohingyans were forced into Bangladesh thru ravines and jungles. Some drown to death, some died with wounds, and some died from starvation.
Today, 90% of total Rohingya population from these 3 regions were driven out, destruction of the remaining houses continue, the rest Rohingyans are trapped and facing horrible attacks, deadly starvation and Rohingya lands are clearing and replacing with mega projects and military base camps.

Similar attacks in Oct 2016 under the banner of so call 'clearance operation', the government trained Rakhine people and armed members of Arakan Liberation Party were actively involved in the operation and began with physical tortures, violent rapes, looting, extortion, destruction of properties and religious buildings, arbitrary arrest and imprisonment of about 800 Rohingyans involving children as young as aged 12,  killing over hundred of innocent Rohingya villagers and over 90,000 villagers were forced into Bangladesh.

Vigilant Attack From 8 of June 2012, razed down about (120) religious buildings, over (23,000) houses from (95) villages across (13) different townships of Arakan state, killing over 10,000 of Rohingyans and Kamans mostly from Sittwe region, about 200,000 Rohingya and Kaman people displaced and about 110,000 of whom are  in 13 to 15 camps of Sittwe (Akyab) city and the rest about (65,000) those from other 8 regions in 26 camps are in aid workers unreachable areas. It been over five years now our Rohingyas and Kamans of Rakhine (Arakan) state have been totally excluded, segregated, confined systematically with blockage of aid and ration supplies and ending up in concentration camps.

The government authorities have been directly involved by deploying the securities forces and joining the attacks vigilantly on the ground, introducing (laws and orders, curfew) and trapping the Rohingya villagers, openly allowing the aggressive armed Rakhine people trespassing and attacking of innocent unarmed Rohingya villagers. The attacks were very well planned that dispatching the gang members everywhere across Arakan, supplying one factory made arms such as arrows and knives, looting (goods, cash, crops and animals) and razing houses, allowing security forces to shot the Rohingyas, bulldozing the buildings those were not destroyed by following day and seizing lands of Rohingyans which were burnt down, disposing the  displaced Rohingya victims into concentration camps, blocking of aid and foods supplies, destroying previous identities and forcing to accept foreigner identity in the mid of humanitarian crisis.

The ousted Thein Sein government itself invited the UNHCR chief to relocate all Rohingyans to a third country in Aug 2012. Additionally, by member of parliament and chairman of Rakhine National Development Party, Dr. Aye Maung (a Bangladeshi by birth) interviewed with Venus News Journal on 14 June 2012 said  “the Rakhine state should be established in the same way Israel was initially established”.
Lately, the current top military general Min Aung Hlaing said on 1st Sept 2017 that the ongoing operation in Rakhine state is ‘unfinished businesses from world war II. 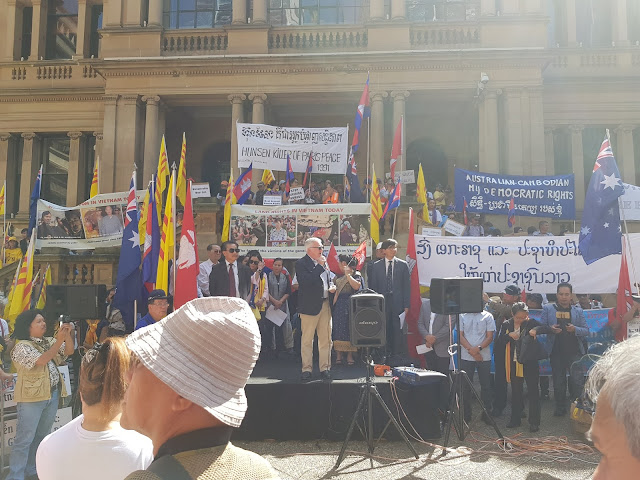 The attacks not end with Rohingya, but extended to different other muslims living in central Burma. From late 2012, with the incitements and intimidation of ex-prisoner fake monk Wirathu and his guider well known abbot Tidagu, the attacks swiftly spread across Yangon, Mandalay, Pagu, Saigaing, Magwe regions where killing hundreds, and displacing tens of thousands and burnt down thousand of houses. Some radical nationalist Burman Buddhist people have proudly declared and hanged up the banner of muslim free villages and many of those displaced Burmese muslims are still not allowed to relocate in their village of origin.
It made very clear that the attacks target not only Rohingya but entire muslim population of Burma. There are other ethnic groups in Rakhine state called Kaman who are recognized within 135 ethnic groups but they too were ended up similarly and pushed into concentration camps and labeled as ''illegal immigrants''.
There are uncounted numbers of Rohingyans and Kamans have been killed, arrested and imprisoned during their escape from northern Arakan state thru inland waters and by lands. Many groups including children and women were arrested on the arrival to central regions of Burma.

The fact is that despite the government fancily fingers onto the small number of Rohingya armed resistant group (ARSA), the ARSA not actually existed in most of those over 400 villages destroyed and the attacks not targeted ARSA, nor arrest any of ARSA members even though the ARSA has been in the region for almost two years. In the other hand, the actions done by ARSA in 30 different areas were also part of minor defense and done same as other armed ethnic groups defending against the government armed forces' ongoing brutalities.
It is also note that the cases of Rohingya are neither new, nor unknown but it is long rooted and well-known to international community. Since the military ruled the country from 1962, the government utilized various tactics and used different armed forces, security forces, nationalists and Rakhine people. 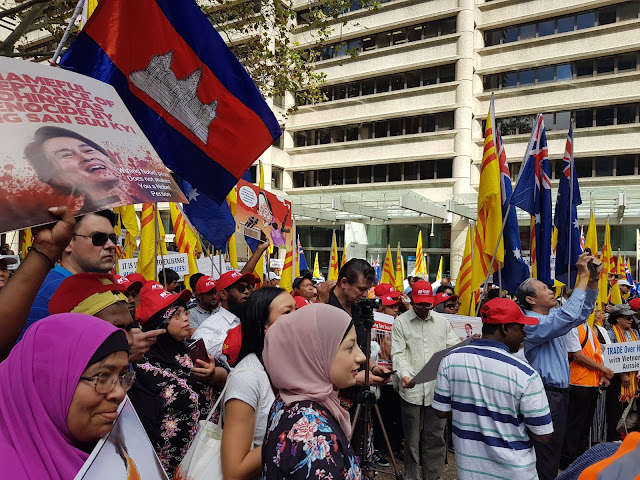 In 1994-95, the command of former S.G  (1) Gen. Khin Nyunt under the dictator Than Shwe (SLORC) government, taken away about 4,000 youths from  northern regions and they never returned dead or alive, forced about 10,000 Rohingyas fled into Bangladesh, seizing of Rohingya lands and replaced with new settler Rakhine people and convicted Burman prisoners.

Pyitaryar Operation in 1991 under dictator Than Shwe (SLORC) government, killing hundreds and thousands jailed, mostly from  Maungdaw, Buthidaung, Rathidaung, Sittwe townships. Over 270,000 Rohingyas were forced to fled and hosted in 20 refugees camps of Bangladesh and some of about 35,000 of them forcefully repatriated. And the government continued seizing, demolishing, vandalizing of historic buildings, villages of Rohingya and replaced with new settlers and military base camps. 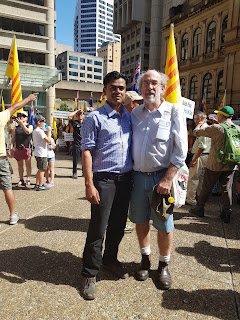 Nagamin Operation in 1978 under dictator Ne Win (BSPP) government, killing in confrontation, sinking the ships load of Rohingyans and thousands of Rohingyans jailed from various parts of Arakan state, seizing and vandalizing Rohingya lands, historical buildings. About 300,000 Rohingyans were forced to fled into Bangladesh and about 200,000 of them forcefully repatriated under the so call bilateral agreement.
Step by step, years after years, the tyrant central rulers have achieved its strategies of eradication of Rohingya and Kaman from home lands. It began with erasing our identity, seized our lands, destroying our properties, looting and rapes, arrest, detention and killing our people. 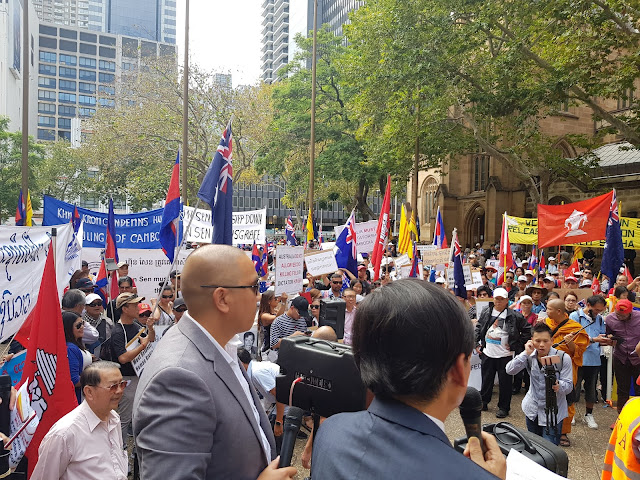 The government introduced 1982 citizenship laws and conducted various forms of population checks and forcing to accept foreigner identity, seizing and destroying their residential documents and not allowing to recourse to become new citizenship even though Rohingyans are qualified to be citizen and ethnic group under 1982 citizenship laws. Following year of 1983, Gwa, Taungup, Tandwe and Ponnagyuan townships were defined as muslim-free-zones by the  government. It is tantamount to official killing license offering to Rakhine people. Hundreds of Rohingyas and Kamans those captured in these regions were brutally executed by Rakhine people.
Up to date, over a million of Rohingya people have been forced into foreign countries. Less than 100,000 Rohingyans left in northern regions (Maungdaw, Buthidaung and Rathedaung townships), another about 300,000 Rohingyas and Kamans left in systematic confinement including about 150,000 people in 42 concentration camps in Southern regions.

Today majority of people and the government authorities are jointly denying our existence and attacking our people.  Every second, every minute and every day for Rohingya is counting the deaths, destruction, attacks, rapes, arson and massive displacement. Therefore, Rohingya need a safe zone/statehood/protectorate/autonomy state, but not repatriation. 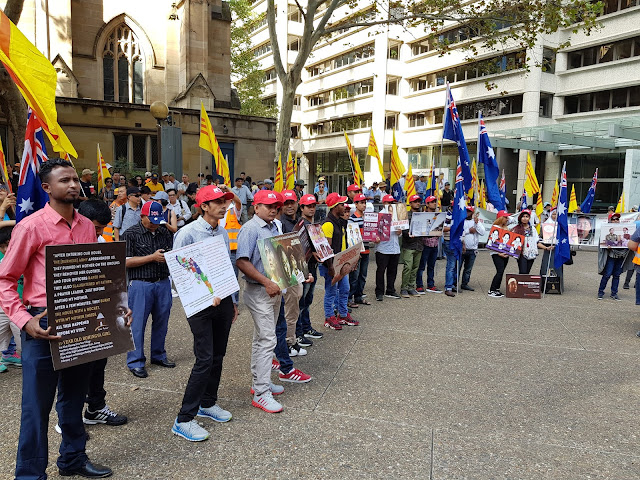 The Repatriation Agreement signed between Bangladesh and Myanmar is not new but it is similar like back in 1992 and 1978. On the return, repatriated Rohingyans were forcefully issued the Temporary Registration Card known as (White Card) with promises of relocation, rehabilitation, citizenship rights, lifting restriction. The promises are never delivered and the government slowly achieved issuing of White Card to the overall population in Northern Rakhine state and placed tougher restriction on traveling.
Later, the White Card came to introduce in Southern Arakan (SRS) and many acting Rohingya leaders from both Southern and Northern regions were detained for resisting it. It was not successful in Southern regions until 2002 and therefore the government changed the card's colour, some written words and forced to have each household to bear at least one that written Bengali race, or mix or non-description of race.
Lately after June 2012 crisis, the government planned to issue same type of foreigner identity with new name (National verification cards- NVC).  By laws, the NVC card issuing is for verification of the undocumented non-citizens. It is nothing to do with Rohingya people who have been issued nationality identities, recognized as an ethnic group and having records of inhabitant.
Many Rohingyans refugees today reloaded in Bangladesh are repatriated former refugees of 1978 and 1991.
In case other countries insist or support the Bangladesh government's repatriation deal, these countries will require to engage the Myanmar government undertake its said promises to be delivered firstly with the remaining Rohingyans and Kamans including those in 42 concentration camps.

Since Myanmar government has been actively terrorizing minorities including Rohingya, Kaman, Karen, Shan, Kachin and create regional instability, we would like to call international communities and developed nations including  Australian government need to counter such terror actions.

Posted by Australian Burmese Rohingya Organization (ABRO) at 00:31 No comments: