Australian Burmese Rohingya Organization has received donation total amount of AUD 4967 in three occasions from Monash Uni Islamic Society thru Dr. Rizvi Mohideen and other AUD 1700 raised from Rohingya community gathering during EID prayer.
Food distributions on the ground were done by a registered local organization- "Myittar Resources Foundation" led by Sayar Chit Ko Ko Oo. We targeted to distribute this little donation to unregsitered vulnerable families and isolated villagers only  because they do not receive any ration from any agencies since they are compelled to be unregistered by camp authorities. 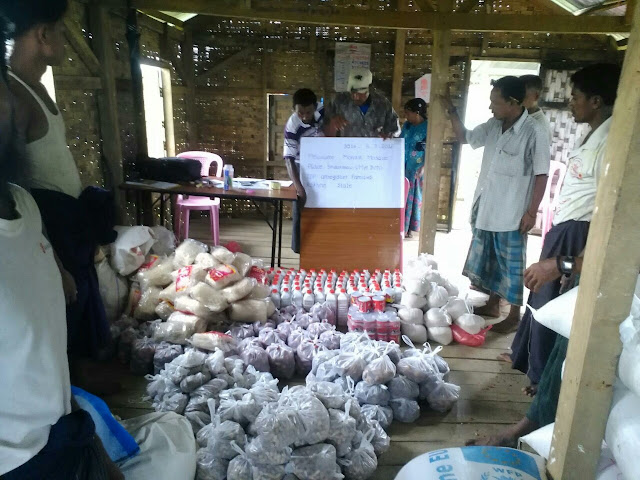 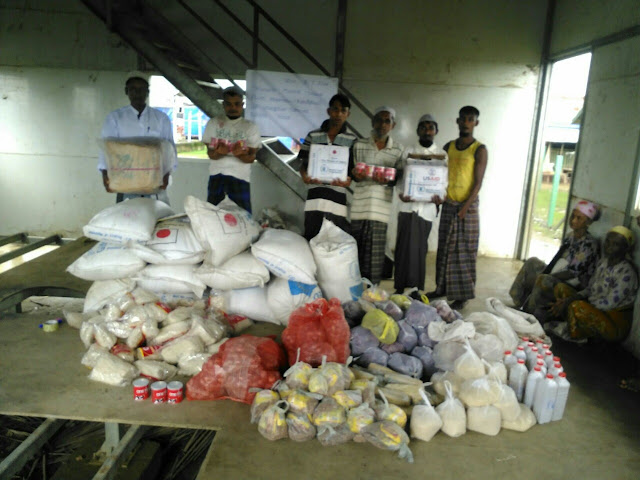 Second amount of (AUD 1292) was spent for unregistered 120 families fled from Kyaukpyu township and still living in other Sintatmaw refugee camp (opposite of Sittwe city). Food provided for each family are: Rice, Oil, Sugar, Traditinal bermicilli, Onion, Potato and Bean. 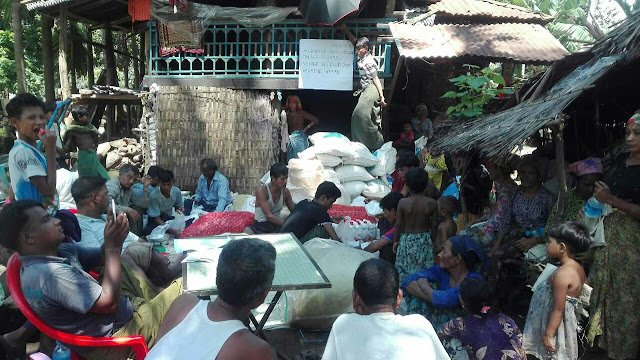 The third donation of (AUD 2255) was sent for isolated villagers of 60 families from Sintatmaw village (opposite of Sittwe city). This villagers are not displaced people but they are isolated from June 2012 and not receiving any kind of food supplies from anywhere..
Food provided for each family are: Rice 24kg, Oil 2lt, Chilli 0.5viss, Sugar 1viss, Noodle 2pks, Onion 1viss, Bean 0.5 viss, Condensed milk 2tin, Soap 4pc, Garlic 0.25viss. 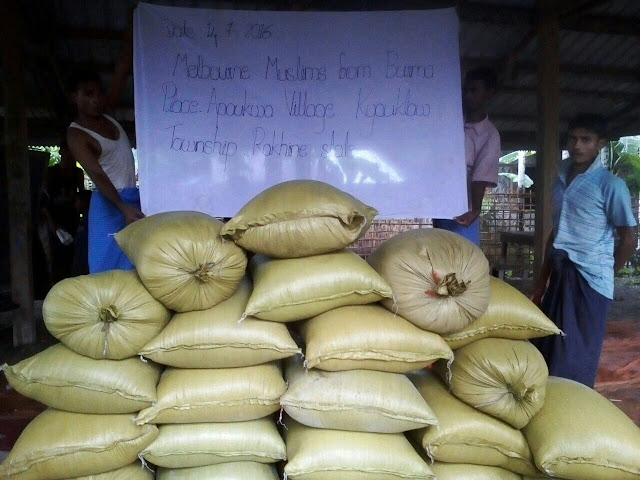 The fourth amount of (AUD 1700) received from Rohingya community been sent for 300 families of isolated and displaced villagers of Apaukwa (Aafok) of Kyauktaw township. Each family received 9.25 kg of rice.

We acknowledge that there are the displaced Rohingya and Kaman people living in 42 locations across Arakan state numbering about 165,000 according to 2013 data, are ending up in systematic confinement in the hand of heavy persecutions since June 2012. Although aid supply and donation could not solve the existing problems, it is also vital to keep their daily survival while aid and food supplies are still in place with various restrictions.

Despite the democratic icon MS. Suu Kyi's NLD party led the government, there is nothing changed for Rohingya and other muslim population. Fleeing through the sea-routes therefore remains only option of escaping from such situation and or dying from starvation in home land.


We, ABRO therefore would like to encourage the Rohingya people and leaders who are in developed countries to actively look after own people who are ending up in homeland.
Posted by Australian Burmese Rohingya Organization (ABRO) at 20:34 No comments:

Right-wing Buddhist extremists.
The entire population of Burma supported Aung San Suu Kyi when she fought to get rid of the military dictatorship of Burma (Myanmar) during the 1990s.
She received tremendous support from all communities, including non-Buddhist ethnicities and Muslim communities. No one considered what her policy on other religions and ethnic areas was. People just wanted to get rid of the regime.
Suu Kyi campaigned all over Burma, organising and educating people living in remote areas. She formed the National League for Democracy (NLD), and issued a membership card with her signature to whoever joined the party.
Many Rohingyas, a predominantly Muslim ethnic group, joined the NLD because they were the most oppressed people under the military government. Some were jailed for working with the NLD. They believed Suu Kyi to be the one to restore their livelihoods.
Today, Suu Kyi says she does not know whether the Rohingya people are citizens of Burma. Nowadays, she no longer speaks the words “unity” and “solidarity”.

No rule of law
We would like to see the government the NLD is participating in uphold the rule of law and respect the dignity and rights of the entire population regardless of race, religion and colour.
We call on the government to act in a timely and appropriate manner to ensure the safety, security and dignity of all people and to ensure a free, fair and equal justice system is available to all.
The NLD government must immediately halt all forms of ongoing persecution, oppression, restriction, segregation and vigilante attacks against minority groups; particularly the Rohingya from Arakan (Rakhine) state of western Burma.
We also call for effective action to prevent ongoing campaigns of racial hatred organised by radical groups, such as the ultra-nationalist Buddhist group MaBaTha (969) Association, which is supported by some politicians, ex-generals and their family members, along with Yangon-based Rakhine people.
MaBaTha, led by Abbot Thi Dagu and the radical monk Wira Thu, has been making wide-ranging attempts to destabilise the country's peace and harmony by preaching racial hatred. Such campaigns are illegal and contravene the current law, but authorities have taken no action.

Backing the Buddhist majority
Despite her accolades, Suu Kyi's party has not demonstrated a resolve to protect the rights of the most vulnerable people in Burma. Rather, her party has cleansed itself of all Muslim members who had been NLD members for decades.
Suu Kyi has sided with majority Buddhist opinion. She has been unwilling to address either the Rohingya crisis or other Muslim communities' plight. Conciliation began with Buddhist communities and left minority issues to be dealt with by the military.
Suu Kyi has never visited or shown her condolences to the hundreds of thousands of displaced people who are victims of state-sponsored ethnic cleansing pogroms. Rather she has remained silent and disregarded their plight because they are not of the Buddhist faith.
Since she was released from house arrest, Suu Kyi has picked up medals across the world, adding to her fame — but she stayed away from Muslim countries.
Before coming to power, Suu Kyi blamed the problems of her country on the lack of the rule of law. She also referred the question of the Rohingya to government, saying it is the government's responsibility to ensure the safety and security of the entire population.
Since becoming head of state, Suu Kyi has failed to uphold the same laws she once insisted upon. Suu Kyi has been reluctant to protect the Rohingya people from ongoing racist vigilante attacks. She has made no effort to ease the humanitarian crisis or to lift the restrictions across the Arakan/Rakhine state and minority areas.
Despite ample historical evidence and the recognition of past governments, Suu Kyi continues to ignore the Rohingya people. Suu Kyi, on behalf of the NLD, has even requested the United States ambassador not use the term Rohingya.
This is a manipulation against existing communities who are daily enduring the country's worst crisis. Suu Kyi's actions demonstrate that rather than standing with victims for an inclusive society, she always takes side of those sharing her Burmese ethnicity.
Suu Kyi's actions are difficult to understand. Her stance on a robust democracy has been stained.
The reasons are that, although a global icon for democracy, Suu Kyi has never believed in federalism for Burma, as she knows ethnic minorities do not want to live under the rule of the Burmese.

Backing the generals
The military regime's generals are taking advantage of her dislike of federalism and avoidance of the Rohingya issue. As a result, the generals have been able to gain much needed protection for themselves for the crimes they committed over the past 50 years.
After several meetings with generals, both sides agreed to allow the military to continue to hold three cabinet posts — defence, immigration and border affairs — and the interior ministry, in accordance with the 2008 constitution. Suu Kyi calculated the agreement was the best way to maintain the image of a democracy icon and Nobel Peace Laureate while sharing power with the military. It gives her no responsibility for the Burmese army controlling minority ethnic areas or the Rohingya issue.
Under this agreement, minorities' rights and federal democracy will no doubt be quashed by military power or languish in a parliament dominated by the Buddhist majority. This is evidenced by the recent parliamentary vote against Rohingya citizenship rights.
The Suu Kyi government's support for the military-drafted citizenship law of 1982 is an excuse to exclude the Rohingya. It has since been applied to the entire Muslim population of the country.
Despite the fact that Rohingya have become de-facto stateless people, they still have historical evidence and official documents proving themselves as native people of Arakan State.
However, the central rulers are reluctant to recognise their identities, allow admission of this evidence or provide citizenship rights. For example, the government has released Buddhist political prisoners, but gives no consideration to Muslim political prisoners from the central regions and Arakan State.
Suu Kyi has also appointed two ex-military personnel from Thein Sein's former military government. This action confused and disappointed the followers of other faiths.
Minister for Religious Affairs Ag Ko was the deputy minister of religious affairs under Thein Sein and only favoured the welfare of the majority Buddhist population. And Zaw Htay, who has spread violence across Burma since 2012 via social media, has been appointed spokesperson for the presidential office. That Suu Kyi knowingly appointed these two figures in her cabinet shows what she truly has in mind.
There is no reason for a government controlling the country not to restore and apply the rule of law. Yet today, we still see some politicians, Buddhist monks, famous icons and academics feeling confident to insult non-Buddhist minorities. For example, the Yangon-based actor of Rakhine origin Ne Toe starred in a movie called Stray Grass that openly insults non-Buddhist religions.
In another example, during the middle of the continuing humanitarian crisis in Arakan State, immigration authorities are conducting population checks in accordance with the demands of the Rakhine Buddhist people. At the same time, the government has provided complete assistance for hundreds of Bangladeshi Rakhine settling on Rohingya people's land in Arakan State.
The new NLD government is keeping the rigid policy of restrictions over Rohingya people's movement, health care, education, rations, livelihood and rights. It allows the continuation of segregation, divided law, oppression, persecution and mass killings. This has not only affected the Rohingya, but anyone of Islamic faith and other minorities. There are about 150,000 displaced people locked up inside ghetto camps across 42 locations in Arakan State and about 1 million people who have remained in systematic confinement since 2012. International aid workers are also systematically removed and threatened.
These people's rights have been taken away by the misuse of power. The actions are reminiscent of the treatment of Jewish people in Nazi Germany and are tantamount to genocide. The situation can be improved and resolved if Suu Kyi wishes.

International action needed
In this regard, the Melbourne-based Australian Burmese Rohingya Organisation calls on the international community, the United Nations and its agencies, neighbouring countries and developed countries, including Australia, to pressure the current government to:
• Install equality in laws, a justice system for all regardless of race, religion and colour, and take effective action against incidents of racial attacks and hate speech;
• End all restrictions, oppression, persecution, segregation, attacks and tyrannical abuses against minorities;
• Assist in the relocation of displaced Rohingya and Kaman people of Arakan state and other displaced people from northern regions to return to their villages of origin and provide facilities to rebuild their houses. Return properties and lands seized by Rakhine people and Rakhine authorities;
• Pave the way to equal access to public services such as education, health care and other welfare services;
• Restore citizenship rights for Rohingya and Kaman people and allow for the application for citizenship using access to evidence fairly;
• Stop the relocation of Bangladeshi Rakhine people from Bangladesh into Arakan state; and
• Immediately free all Muslim prisoners including those from Arakan state and central Burma.
We also encourage countries such as Singapore, Malaysia, Japan, Australia, Britain, the US and Canada to scrutinise and block the entry visas of Burmese people who actively preach racial hatred and anti-social behaviours.
[Habib blogs at Arakan Diary and works with the Australian Burmese Rohingya Organisation.]
Like the article? Subscribe to Green Left now! You can also like us on Facebook and follow us on Twitter.
Posted by Australian Burmese Rohingya Organization (ABRO) at 19:20 No comments: