A Memorandum to Burmese Embassy in Canberra, Australia

Today, we staged a demonstration in front of Burmese embassy in Canberra in the present of Australian Federal Police (AFP). 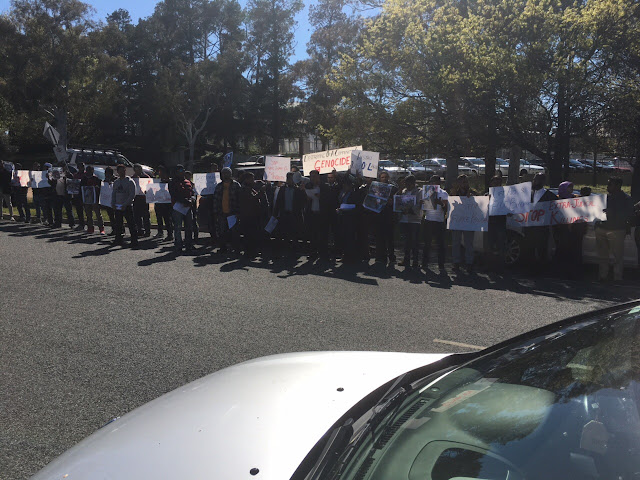 It was started from 9.30am and taken one hour long by reading 3 pages of statement by Habib and slogans by Min Min. 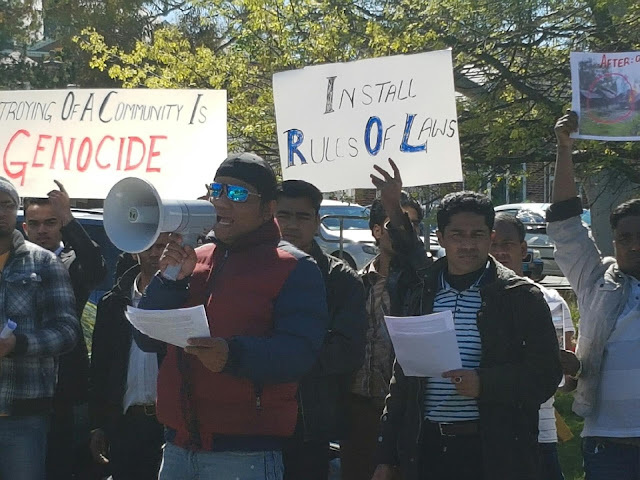 Demonstration was joined by about 60 Rohingyas collectively from Melbourne and Sydney. 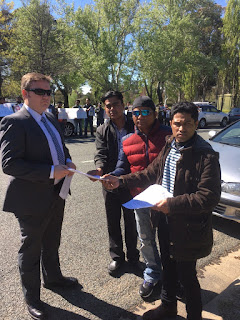 We, ABRO would like to raise serious concern over recent arbitrary mass killing and slaughtering about 100 Rohingyans and ongoing arrests and force confession from Maungdaw township, keeping the Rakhine (Arakan) humanitarian crises alive, allowing to carry out genocidal attacks and various operations, vigilant racial attacks, continuously locking down about 150,000 Rohingyas and Kamans in ghetto type concentration camps across 42 locations and confining the rest about a million in their villages from June 2012, mass destruction of historical evidences and religious buildings, forceful expulsion, blocking aid and food supply, prohibit livelihood and compelling to die from starvation, denying their right to have rights such as medicare, education, relocation and movement, seizing and destroying residential documents and forcing to accept foreigner identity and not allowing to recourse under new citizenship act. .

After recent attacks carried out by unknown armed gangs on border police in Kyiganbyin, police outpost in Kotankauk, and local police office in Nhakhuya where equal members of causality occurred from both sides, the government forces instantly taken intentional steps of retaliation to annihilate the Maungdaw township resident Rohingyans from 9 Oct 2016 under the so call 'Land Clearing Operation' (Nay Myay Chin Linn Yay).
In this operation, about 100 Rohiongya involving women, children and elderly people from 11 different locations were closely shot dead, slaughtered in cool blood by military and security forces. Many of those taken away by security and military forces were also found in a mass grave with their hands tied that cleared how they been brutally killed. Additionally, gang rapes of teens by those taken away by authorities, looting goods and cash, extortion, expulsion from villages and blocking of food supply, are also recorded. 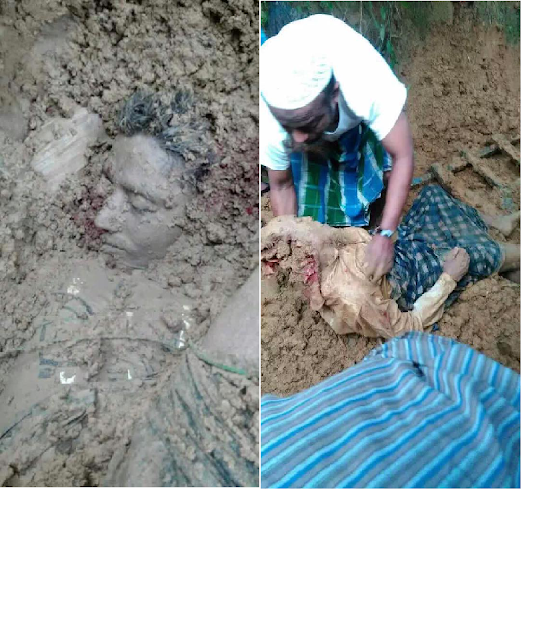 An estimated about 5,000 people have been displaced and now shelter-less after about 700 houses and livestocks in Wabaik hamlet of Kyiganpyin village, Kyet Yoe Pyin village tract, Nga Sa Kyu village tract and Ngan Chaung village tract, were burn down by security and military forces.
Despite the government officially denounced the armed gang insurgent for attacks and torching of houses, it actually government forces who shot civilians and torching of houses that were captured in the photos. 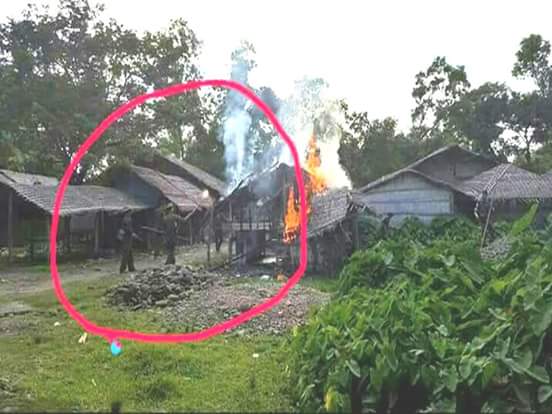 Despite Ms. Suu Kyi told its authorities to deal those arrestees by lawfully and requested not to compete by forces between government forces and armed groups, it is practically different on the ground. Her government does not enhance her authorities to act lawfully, nor taking action onto officials those involved in arbitrary and lawless killings, and for committing physical abuses.
Yet, Ms. Suu Kyi did not confirm the attacks but her presidential office's official statements and Burmese news agencies widely spreading reverse information by linking the attacker armed group with non-existing foreign group and fabricating false news, evidences and implicating Rohingya community.

It has been over four years now Rohingyas and Kamans of Rakhine (Arakan) state are totally excluded from Burma and trapped into the worst part of human tragic such as APARTHEID, SLAVERY & RACISM, EXTERMINATION.. For decades, Rohingyas have been oppressed, victimized and terrorized by the both government authorities and extremist Rakhine people that been recorded commonly in 1942, 1949 1967, 1978, 1991,1994/95, 2002 and the latest state sponsor genocide began from June 2012.
From 8 of June 2012, total destruction across (13) different townships of Arakan state, reached at (97) mosques, about (23,000) houses from (95) villages, killing thousands Rohingyans and Kamans and nearly 200,000 people displaced of whom about (110,000) people are in 13 to 15 camps of Sittwe (Akyab) city and the rest about (65,000) those from other 8 regions in 26 camps are in aid workers unreachable areas, and number of arbitrary detention reached at least 12,00 Rohingyas and Kaman muslims mainly from Maungdaw, Buthidaung and Sittwe townships.
In Burma there are so many organizations including Red Cross Society, Healthcare clinic but all are puppet bodies of terror government and not delivering services for Arakanese muslims. While Rakhine children are freely attending the government schools, the Rohingya youths those teaching Rohingya kids, distributing rations, Rohingyan language support workers, providing medical assistance in the camps, are instantly targeted by local authorities. So, many Rohingya youths have continued to flee into neighbouring countries. Government authorities pretend unable to interfere in local matters and also instantly blocking aid delivery and medical treatment for displaced Rohingya and Kaman victims..

The ousted Thein Sein government pretended to be uncontrollable and allowed to spread across central Burma therefore the attacks carried out in 26 locations of 8 different states that destroyed thousands of houses, killing hundreds of people, displaced more than 20,000 people.
Despite the Thein Sein government has characterized the events as 'communal violence, it was a well plan and the government’s involvement and contributions into the crisis were very obvious.
The latest target on Rohingya in Maungdaw township from 9 Oct 2016, is actually another propaganda to divert international attention on genocide and atrocities committed by government forces.

As we aware, the current central ruler of NLD has been following the same footpaths and tactics of the past regimes that keep routinely attacking of ethnic minorities such as Chin, Karen, Kachin, Shan and Rohingya.
When there are double numbers of government armed forces presenting in minority areas, and still carrying out attacks, the minorities lost hopes and the number of armed ethnic group from repression is yet to be grown in the future because it is only option to protect their respective own people and lands from aggressive military operations, tyrant abuses and genocide. However sadly, the people who are protecting own people from genocidal attacks are branded as insurgency or guerilla by central ruler government and Burmese news agencies.

Historically, the past government and now latest NLD, all of them have actually no strategy for peace, nor taken workable steps to bring peace and build trust with ethnic armed groups, But they are records of breaking ceasefire agreements and aggressive and offensive attacks thru waging wars and physical tortures over civilians that account for crimes against humanity.
The fact is that, the late NLD government's failure or not yet marched forward to achieve genuine cease fire, reconciliation with minorities and restoration of genuine federal democracy system. But, NLD re-conciliated with military and kept her military in power so that minority areas and their issues kept under military control.
NLD leader Ms. Suu Kyi forgiving military generals' the past crimes and now again favouring through achieving lifting blacklist of its generals.

We strongly urge Ms. Suu Kyi who is above the president of the country and led the NLD government and its authorities to uphold its afore said rules of laws and respect the dignity and rights of the entire population regardless of race, religion and colour and to ensure a free, fair and equal justice system is available to all.
NLD leader Ms. Suu Kyi has not yet condemns it militarily attacks on minorities, not yet achieved release of a single muslim political prisoner and yet to outline its plan on minorities.

NLD government must also install laws and orders to equally guarantee safety and security of the entire people of Burma. The NLD government must immediately halt all forms of ongoing persecution, oppression, restriction, segregation and vigilante attacks against minority groups; particularly the Rohingya and Kaman from Arakan state of western Burma.
The NLD government must take immediate action to prevent ongoing campaigns of racial hatred organised by radical groups, such as the ultra-nationalist Buddhist group MaBaTha (969) Association, which is supported by some politicians, ex-generals and their family members, along with some Yangon-based Rakhine people.

We are also disappointed to see NLD government and its authorities are forcing Rohingya and Kaman people to accept foreigner identity, seizing and destroying their residential documents and not allowing to recourse to become new citizenship even under 1982 citizenship act.
Practically, it is not the 1982-citizenship laws that stripped off citizenship but the authority who are intentionally reluctant to access the Rohingya's historical existence and ancestral evidence that prove primary evidence earlier than prior to 1824. The fact is that after British occupation of Arakan in1824, the repatriated Rohingya war victims of 1784 and 1794 Burman king invasion of Arakan, were miscounted as British era settlers by central rulers.
Like in 1978 and 1992, after drove out of Rohingyans and Kamans from their ancestral homelands, the authorities tactically started collection of data and those forcefully repatriated under bilateral agreement were branded as Bengali so it could be accounted by exclusion of Rohingya into national census as a creation official evidence for national population history.

We also would like to urge the UN and its member countries including countries those have business ties with Burma to join together in taking effective actions onto Burma's central ruler NLD government and it authorities to abide by domestic and international laws.

We, ABRO therefore demands the following:
1) UN to use force to restore peace and stability in minority areas including in Arakan state.
2) UN to use force to immediately suspend blockage of food and aid supply and grand special power to aid agencies to enable to supply food and aid on the ground freely.
3) UN to effectively pressurise onto central ruler government to immediately lift all kinds restrictions.
4) UN to monitor central ruler NLD government and its armed forces to abide by domestic and international laws.
5) To stop forcing and pressuring of Rohingya and Kaman to accept foreigner identity.
6) Immediately release of muslim political prisoners from central Burma and thousand of Rohingya prisoners mostly detained in Sittwe Central Jail, Buthidaung Jail and many other who are detained in police lock-up and military camps.