Myanmar: while the world sits on its hands, people fight military junta with violence and silence

A year after a military coup, Myanmar remains mired in conflict. The country's military, the Tatmadaw, has failed to convince most of Myanmar's 55 million people of the legitimacy of its rule. Anti-coup resistance continues to be widespread nationwide.

The anniversary will be marked within Myanmar by a "silent strike", with participants acknowledging those jailed or killed by the junta during the last year by avoiding public space, leaving Myanmar's streets empty. The junta has threatened participants with decades-long jail sentences and property confiscations. But if previous calls for anti-coup resistance are an indication, tens of millions of people will stay home and Myanmar's streets will be spookily empty.

Silent strikers have a lot of people to acknowledge. The junta has jailed 11,838 according to Myanmar's Assistance Association for Political Prisoners. This included State Counsellor Aung San Suu Kyi, President Win Myint and as many of Myanmar's civilian politicians as the military could round up and have killed – 1,503 – often with appalling cruelty.

In the immediate wake of the coup, hundreds of mostly young, peaceful protesters were killed by army snipers. In ethnic minority areas, soldiers replicated the kinds of scorched earth tactics used when the Tatmadaw genocidally deported the Rohingya in 2017. 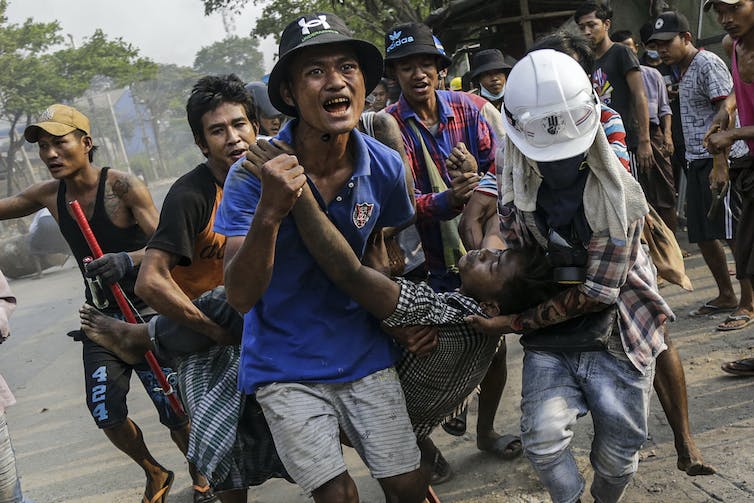 A crackdown after the coup killed hundreds of protestors. EPA

Recent indiscriminate atrocities include the driving of a truck into a crowd of peaceful protesters, the burning alive of 11 people including four children in retaliation for an attack by anti-junta militia, and the massacre of 31 people fleeing violent clashes.

Rather than quelling popular opposition to military rule, the junta's brutality and extreme violence has instead convinced many people of the necessity of removing the military from power for good. Resistance has encompassed a broad range of activities including peaceful protests that drew global attention, and civil disobedience and strikes that have paralysed the bureaucracy and transport sectors. Increasingly this has included violent opposition to the junta.

Resistance is strongly encouraged by the National Unity Government (NUG), a shadow government in exile that draws heavily from politicians elected at the 2020 general election. In September, NUG leaders announced a "defensive war" against the junta, encouraging the creation of People's Defence Force militias to target the Tatmadaw and its assets.

These militias have increasingly linked with the armed wings of Myanmar's ethnic minority groups, of which there are dozens, many of whom have themselves been in conflict with the Tatmadaw for decades. A nationwide united front of militias and ethnic armed groups has the potential to significantly stretch Tatmadaw capabilities.

Creating a further challenge for the junta is the shambolic state of the economy. The World Bank estimated an 18% contraction during 2021 and predicted a paltry 1% growth in 2022, describing the economy as "critically weak". The national currency, the kyat, has fallen to historic lows, losing 60% of its value in September alone.

The World Food Program estimated a 29% rise among a basket of basic foods, and a 71% hike in fuel prices during 2021, contributing to widespread food insecurity and pushing millions towards poverty.

The perilous state of the economy has revived memories of the shockingly poor economic management during previous periods of military rule which saw Myanmar (then Burma), in 1987, designated a "Least Developed Country" by the UN.

Internationally, the news for the junta is mixed. Military-ruled Myanmar is isolated diplomatically, the military government has been barred from participation in meetings of the Association of Southeast Asian Nations (Asean), and Myanmar's delegate to the UN General Assembly speaks on behalf of the NUG, rather than the junta. But the generals have not had to face foreign intervention, an arms embargo, or even a UN Security Council referral to the International Criminal Court (ICC).

Western political leaders have been strong on anti-coup rhetoric and have imposed a range of economic sanctions, but there has been a studied reluctance to go beyond that. Most have been comfortable with Asean taking responsibility for addressing the situation in Myanmar. But the consensus-based regional bloc has proven unable to take decisive action, and its "five-point consensus" has been variously frustrated and ignored by the junta.

At the security council, neither the US, UK, nor France, all permanent members who have condemned the coup, has been prepared to force a vote on imposing an arms embargo or referring Myanmar's generals to the ICC. This might at least encourage Myanmar's defenders at the UN and its major arms suppliers – China and Russia - to push the junta to moderate its actions.

This situation is reminiscent of the west's response to the 2017 Rohingya crisis, when soaring rhetoric was not matched with actions to prevent criminality or achieve accountability. This arguably contributed to the Tatmadaw's sense of impunity which underpinned its decision to launch the current coup, convinced that it might face condemnatory rhetoric but little else from the UN or western governments. 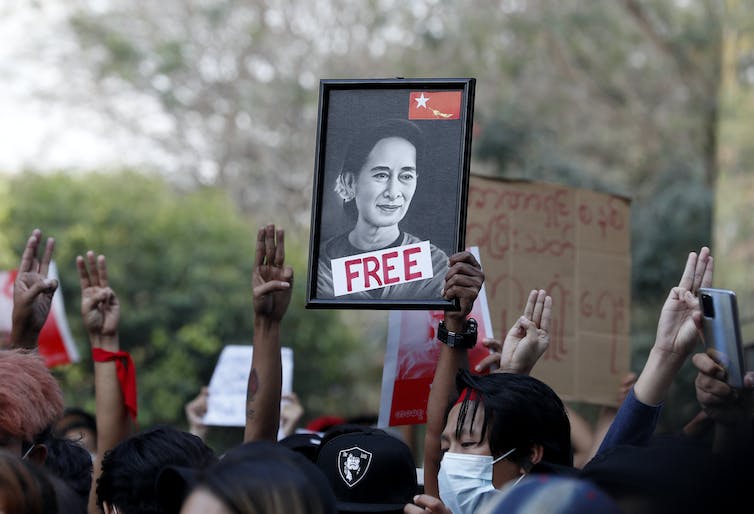 Military boss Min Aung Hlaing now presides over a crisis-riven country at the edge of complete political and economic collapse. While the junta has unquestionably failed to win hearts and minds and appears to have wildly underestimated the likely domestic opposition to renewed military rule, there are few indications the junta is considering any compromise that might see the Tatmadaw return to its barracks.

Meanwhile, held incommunicado for a year, Aung San Suu Kyi, the winner of the 2020 general election, has been recently sentenced to six years in jail via an absurd, military-run court process.

All this suggests Myanmar faces a worrying future: a military determined to rule and prepared to use appalling violence to achieve power, and a population equally determined to remove the military from power.

A protracted conflict will have devastating consequences for Myanmar's people. By imposing an arms embargo on the Tatmadaw, the security council could help to defeat the junta more quickly. In the silent strike, millions of people will bravely risk decades in jail to protest military rule that is as illegitimate as it is cruel. They will be hoping the security council can show some bravery too.

Posted by Australian Burmese Rohingya Organization (ABRO) at 00:23 No comments: