"As a Rohingya Sister with Australian Burmese background from Sydney, I am requesting all United Nation authorities, policymakers and Rohingya humanitarian activists that my Rohingya brothers and sisters are in desperate need of medical support, phone and internet access in refugee camps in cox bazaar." said Pan Sandar Myint

"Rohingya refugees are in the greatest risk during locked down of covid-19 because they are not receiving updated information of covid-19 from internet, phone and medical support service due to the internet ban by the Bangladesh government."

While people across the globe are staying at home comfortably by watching TV, using internet & getting easy access of medical support and latest information of covid-19, nearly one million Rohingya refugees are banned from internet and phone service to receive basic information about coronavirus. This lead them in prodigious risk to the virus because of not getting enough knowledge for precautions of the virus.

My team and I have done online research with three Rohingya youths who have shared struggling stories of refugees in the cox bazaar camp.

Yasor Arfat is currently living in Bangladesh Rohingya refugee camp (cox bazaar). According to him, all refugees are safe and healthy. No one has infected from covid-19 yet. But there is no network and no medial support such as masks, gloves and hand sanitisers. He has learnt that the best way to safeguard from the virus is washing hands regularly and avoiding crowded places. But it is impossible to avoid from crowded places because they all live together in tiny crowded shelters. These shelters are too close to each other (less than 3 inches).  They all share toilet and water well.

Maung Maung Naing is currently residing in Bangladesh from Maungdaw, Buthithaung. He has lived in the camp and has faced inaccessible of internet. According to him, the Bangladesh government has banned the internet & phone service since 2019. It has restricted on aid groups by accusing on some NGOs of encouraging refugees to resist deportation.   The Bangladesh army has started building fences with watchtowers to prevent refugees from leaving the strictly controlled camp areas. He is very worried about hard medical support system in the camp during this sensitive severe situation of covid-19. For 1 million Rohingya refugees, the Bangladesh has provided a few medical facilities in which all refugees need to queue in serial number in a large crowd to get treatments without following 1.5 metre social distancing procedure of covid-19 precaution. These people have no right to work there and cannot afford to buy masks and gloves as well.

"Coronavirus is risky like a time bomb to Rohingya refugees" Being an advocate of my Rohingya family, I am extremely worried for my Rohingya brothers and sisters residing in the Rohingya refugee camp (cox bazaar) that they will face severe fatal situation if the virus has reached there. They have no updated and enough medical supplies, equipment, and health practitioners like in Australia, USA, Canada & UK. I am really urged all United Nation authorities, policy makers and humanitarian activists to stop Bangladesh government from banning internet and phone service to Rohingya refugees by enhancing on aid groups more with full medical supplies, medical support and qualified health practitioners before the virus has reached to the camp.

Posted by Australian Burmese Rohingya Organization (ABRO) at 19:34 No comments:

Since the communal pogroms of 2012 razed the villages of Muslim Rohingya across Myanmar's Rakhine State, there have been debates about how to protect Rohingya populations through international legal mechanisms. The search for legal avenues gathered pace following insurgent attacks by the Arakan Rohingya Salvation Army in August 2017 that resulted in a disproportionate collective punishment response from the Myanmar military. This saw the slaughter of thousands of unarmed Rohingya and over 740,000 people fleeing to Bangladesh. 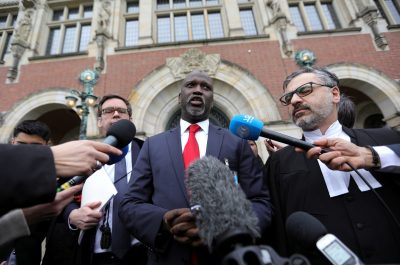 The most promising avenue to date has been through the International Court of Justice (ICJ) in The Hague. On 11 November 2019, the Republic of The Gambia filed an ICJ application to start proceedings against Myanmar for violations of the Genocide Convention.

Another international legal option is to prosecute the Commander-in-Chief of Myanmar's military Senior General Min Aung Hlaing and other military leaders at the International Criminal Court (ICC). But there are difficulties with this approach. Myanmar is not party to the Rome Statute, which created the court, and any attempt to force the ICC to take a case like this one through the UN Security Council would likely be vetoed by China and Russia.

Since Bangladesh is party to the Statute, and the Rohingya crossed the Bangladesh border, the ICC ruled that it had jurisdiction over the case. In November 2019, the ICC approved a full investigation into allegations of 'systematic acts of violence', deportation as a crime against humanity and persecution on the grounds of ethnicity or religion against the Rohingya. By February 2020, investigators from the ICC Office of the Prosecutor visited Rohingya refugee camps to collect evidence for their case.

As the ICC case gathered pace, the initial hearings of the ICJ case in The Hague in December 2019 provided more spectacular imagery for the world's media. With an eye firmly on the forthcoming November 2020 national elections, Nobel Peace Laureate and Myanmar's de facto leader Aung San Suu Kyi personally travelled to the ICJ to defend the actions of the military and the Myanmar state against charges of genocide. There is little sympathy for the Rohingya in Myanmar. Ever since the 2012 pogroms, when the United Nations and aid agencies were seen as being overly sympathetic to Muslims and the Rohingya, there has been a nationalist antipathy to what is perceived as international meddling in Myanmar's domestic affairs. Aung San Suu Kyi's ICJ defence was interpreted as defending the nation and was supported by large rallies throughout the country.

While giving evidence to the ICJ, Aung San Suu Kyi admitted that 'it cannot be ruled out that disproportionate force was used by members of the defence services in some cases, in disregard of international law'. She insisted that any breaches would be investigated internally. This 'bad apple in the military' defence was debunked by evidence that demonstrated the erasure of Rohingya communities was systematic.

Internal judicial redress within Myanmar has been ineffectual. There have been several internal inquiries, all of which have cleared the military of any systematic crimes despite overwhelming evidence to the contrary. The government-appointed Independent Commission of Enquiry (ICOE) did find that security forces and civilians committed war crimes and violated human rights in Rakhine State but held that these were rogue elements acting in isolation rather than reflections of a more systematic policy.

In late January 2020, the Court declared that The Gambia had established prima facie a breach of the Genocide Convention. It issued several urgent measures to Myanmar to prevent further acts related to breaches of the Convention and the destruction of evidence. Myanmar is to provide regular reporting to the Court on measures undertaken. The Gambia has until 23 July 2020 to submit its full case and Myanmar has until 25 January 2021 to submit its response.

The ICJ has no power to enforce its judgements and compel a state to take action. It relies on the UN Security Council to support its judgements. As key allies to Myanmar, China — with its veto power at the Security Council — along with Vietnam refused to agree to a statement compelling Myanmar to comply with the Court's instructions. Although the Court's decision was celebrated by Rohingya refugees in Bangladesh's camps, the limited powers of the ICJ mean that little may change on the ground.

The Myanmar government, led by the National League for Democracy (NLD) and Aung San Suu Kyi, has no oversight over the military and Senior General Min Aung Hlaing. But Aung San Suu Kyi is the only person capable of communicating the suffering experienced by the Rohingya effectively. Her silence on the military's brutality and her attempts to exculpate it from wrongdoings is normalising what, under any reasonable assessment, constitutes ethnic cleansing, crimes against humanity and perhaps even genocide.

Myanmar's politics is complex and fraught. After years of military rule, the path to democracy was never going to be smooth. But without the support of Aung San Suu Kyi, it is difficult to see justice for the Rohingya emerging anytime soon, with the potential of a coronavirus (COVID-19) outbreak in the refugee camps increasing the urgency of action. The NLD government needs international support to transform the country economically and politically. The pursuit of justice and democratic development in Myanmar will also require deeper engagement by Western companies, governments and NGOs. Right now, this pursuit is being left to the vicissitudes of foreign investment and diplomacy with China.

Foreign governments need to apply pressure on both the government and the military so that they adhere to international norms whenever they deal with Myanmar's ethnic communities, regardless of that community's perceived place and legitimacy in some mythical nationalist past.

Adam Simpson is Senior Lecturer of International Studies in UniSA Justice & Society and Program Director, Master of Communication, in UniSA Creative, The University of South Australia.

Posted by Australian Burmese Rohingya Organization (ABRO) at 19:30 No comments: