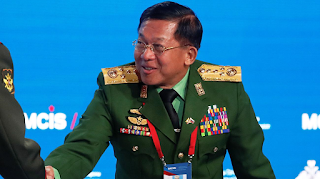 Myanmar's military commander-in-chief, Senior General Min Aung Hlaing shakes hands with a participant during the annual Moscow Conference on International Security (MCIS) in Moscow, Russia April 24, 2019. Photo: Reuters
The world must cut off financial and other support for Myanmar's armed forces, a UN fact-finding mission said today, repeating a call for top generals to be prosecuted for abuses against the Rohingya Muslim minority.

Myanmar security forces are accused of killings, gang rape and arson during a crackdown that drove more than 730,000 people to flee western Rakhine state for neighbouring Bangladesh after attacks on police posts by Rohingya insurgents in August 2017.

Myanmar has rejected most of the accusations and dismissed a report last September by the UN-appointed panel, which said military officers carried out the campaign against the Rohingya with "genocidal intent" and should stand trial.

Autralian human rights lawyer and panel member Christopher Sidoti said it had seen no evidence Myanmar was trying to resolve the crisis or ease the safe return of refugees.

Myanmar has barred the experts from visiting the country, but they visited the region, including refugee camps in Bangladesh's Cox's Bazar district, beginning early this month.

"Due to the gravity of the past and continuing violations, attention must be given to the political, economic and financial ties of the Myanmar military, to identify who and what should be targeted," Sidoti said.

That would aid efforts to cut off the money supply, as a means of boosting pressure and reducing violence, he added.

The statement did not identify specific nations. Myanmar's military buys weapons from China and Russia, among others. Many Western countries have supended training programs over human rights abuses and impose arms embargoes.

Myanmar rejected the fact-finding mission when it was formed at the Human Rights Council in Geneva in March 2017, with a mandate to investigate military abuses against the Rohingya and in other conflicts with ethnic armed groups in Myanmar.

"Our country is an independent country, so we don't accept our matters being interfered with," he told Reuters by telephone.

The UN panel said it was still receiving reports of human rights abuses in Rakhine and Chin states, where clashes between the military and insurgents from the mainly Buddhist Rakhine ethnic group since late last year have displaced more than 30,000 people.

Posted by Australian Burmese Rohingya Organization (ABRO) at 03:00 No comments: