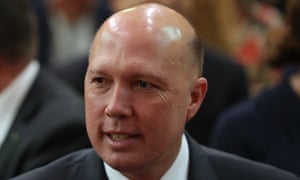 Peter Dutton allowed an 'illegal maritime arrival' to settle in Australia in July 2015, but has persisted with his hardline rhetoric since. Photograph: Mike Bowers/The Guardian

Peter Dutton approved a plan to bring a refugee child to Australia after lobbying from Nauru, despite warnings from his department that it would be seen as a contradiction of the policy not to resettle people in Australia who came by boat.

Dutton made the intervention on behalf of a stateless Rohingyan unaccompanied minor whose parents were murdered in front of him in Myanmar before he arrived at Christmas Island by boat in October 2013.

The exception to Australia's harsh refugee policies is detailed in a July 2015 departmental submission, seen by Guardian Australia, asking Dutton to note the risks associated with the proposal, after he had agreed to bring the refugee to Australia during a meeting with Nauruan justice minister David Adeang in March 2015.

Despite allowing an "illegal maritime arrival" to transfer to Australia months into his role as immigration minister, Dutton has persisted with hardline rhetoric since, warning as recently as 30 May that Australia "can never allow people to come here by boat".

Habiburahman, a spokesman of the Australian Burmese Rohingya Organisation who goes by one name, told Guardian Australia the process took two and a half years but the young refugee was settled in Australia in late 2016 or early 2017, and lived with two relatives.

The home affairs department submission asked Dutton to consider that the "exceptional [transfer] will likely be characterised by refugees in Nauru, and others as a direct contradiction [of] your strong messaging that refugees determined under regional processing arrangements will not be resettled in Australia".

The department also warned that allowing "select refugees access to Australia could trigger risky and undesirable behaviour", be seen as "inequitable" and result in protests or "increased self-harm attempts among the refugee cohort (including minors) in an attempt to orchestrate passage to Australia".

The submission sets out a proposal to bring the refugee to Australia as a "transitory person", place him in community detention in the care of a relative, and then grant him a temporary protection visa. 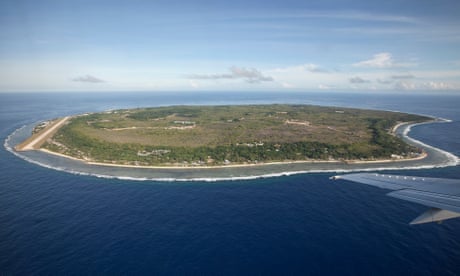 Judge accuses Australia of putting relationship with Nauru before the law

Dutton noted the arrangements and risks set out in the submission, signing and dating the document on 19 July 2015.

The case of the refugee – who turned 18 in September 2015 – was first raised by the Australian Human Rights Commission in 2014 with the then immigration minister Scott Morrison.

Morrison referred the request to Adeang, the child's legal guardian, who then wrote to Dutton, the new immigration minister, in February 2015 asking him to transfer the refugee to Australia "on a very exceptional basis".

Adeang said the boy was "highly vulnerable and experiences ongoing emotional and psychological distress". He noted that after the boy's parents were murdered, the child's only surviving family members were an elderly grandmother in Myanmar, and two relatives in Australia.

The justice minister concluded that "it would be in the boy's best interest to be reunited with his family members in Australia".

"While I am aware of Australian policy, I am also aware that occasionally individual exceptions need to be made."

The refugee arrived at Christmas Island in October 2013, after the July 2013 cutoff when the Rudd government decided that all asylum seekers who arrived by boat would be transferred to offshore detention.

He was transferred to Nauru in April 2014 after an immigration department assessment found "there were no particular vulnerabilities or issues identified" with his case.

The submission states that Nauru asked for "permanent resettlement" of the refugee in Australia and that Dutton agreed that he be "brought to Australia to settle with his [relative]".

The Coalition was elected in September 2013 promising "maximum deterrence" against people smuggling, including through reintroduction of temporary protection visas.

Since then the Abbott, Turnbull and Morrison governments have argued that any deviation from a zero tolerance approach by Labor would lead to a resumption of people-smuggling boats.

The home affairs department said: "The government has consistently stated that people in regional processing countries will not permanently settle in Australia."